FORGING
YOUR IDEAS
INTO
INNOVATIVE SOLUTIONS

The town of Lumezzane, located in the province of Brescia, is universally recognized as the industrial district with the highest success percentage among metal alloys machining companies. It even earned an appearance on the cover of The Economist. The Gnutti family is an outstanding example of a trend of entrepreneurial success, which through the Holding Umberto Gnutti S.p.A. (“HUG”) fully controls Brawo S.p.A.. The family’s industrial roots date back to 1860, when Giacomo Gnutti, great-grandfather of the current President and majority shareholder Mr. Giorgio Gnutti, started his personal gunsmith’s forge in Lumezzane .

Developing and converting the business, Umberto Gnutti would later take over the limited company with his sons, founding Almag in 1946, which specialized in the hot forging of copper , brass and aluminum alloys.

Almag S.p.A. soon became the 2nd largest producer of brass rod in Italy and the 3rd largest in Europe. To get there, the company diversified by turning scrap into brass ingots.

Giorgio Gnutti decided to acquire Brawo S.p.A. in 1976 (active until 1989 under the company name “Metalstampati Bonomi”) and transferred all the hot forging operations from Almag S.p .A. to Brawo S.p .A..

The decision proved to be a successful one. By the mid 90’s, under his counsel and his son’s management, Brawo S.p.A. became what it is today, a worldwide leader in the supply of brass, copper and aluminum components.

Another aspect of Brawo’s industrial development is the many initiatives it took which allowed the formation of a synergistic and comprehensive industrial group. Because of these initiatives, it was able to operate in complete productive autonomy. The group is also geographically strategic with Brawo S.p.A., (operating from northern Italy), Brawo Brass working Ltd. (operating in Canada as Lofthouse Manufacturing), Brawo USA Inc. in the United States and Emmebi S.r.l. in Italy.

These companies jointly create BRAWO’s world within the HUG group. 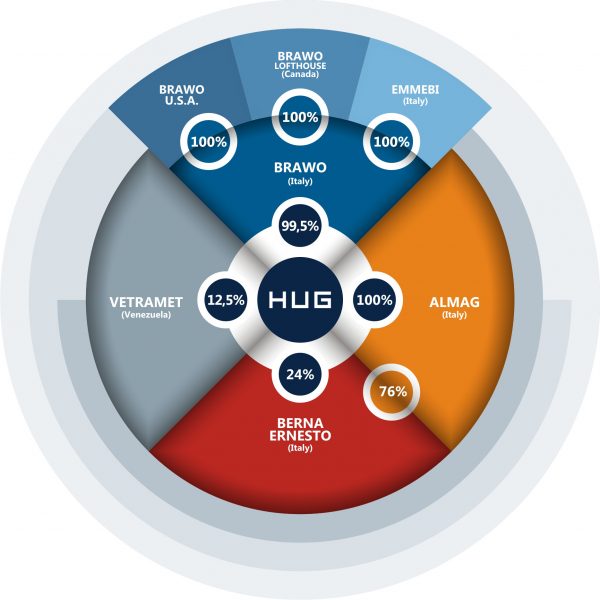